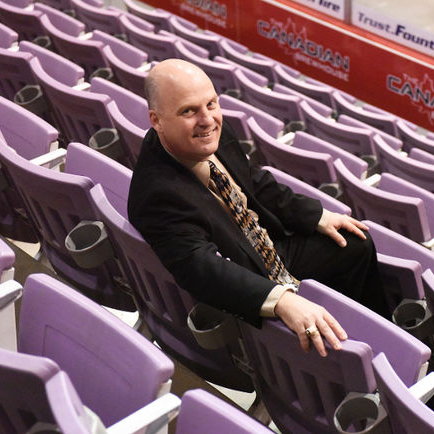 Scott says that his time at DC played an instrumental role in getting his career started. While attending DC, he worked with the Oshawa Generals Hockey Club and was supported by his professors and his classmates who would often joke that he was full-time with the Oshawa Generals and only part-time at DC. Upon graduating, Scott went to work for the Soo Greyhounds Hockey Club as the Director of Marketing and Media Relations for two years before returning to the Oshawa Generals as Business Manager. Throughout Scott’s 20-year career in hockey, he made many more exciting moves to various hockey clubs. In 2003, Scott set his sights on baseball and became Senior Manager, Sales Channel Development for the Toronto Blue Jays/Rogers Communications where he spent the next 8 years. In 2010, Scott’s career path took a surprising turn when he was recruited to the General Manager and CEO position with Mosaic Place and YaraCentre. From this amazing opportunity, Scott then moved on to become the General Manager with the City of Grand Prairie – Revolution Place where he currently works.

Scott says that his career path moving from hockey to baseball to running venues is a bit of a non-traditional path and although each industry may be vastly different, they have some common threads when it comes to the business world – namely revenue development and ensuring the best possible customer or fan experience. Overall, Scott’s experience at DC helped to prepare him for all of the twists and turns his career has taken.