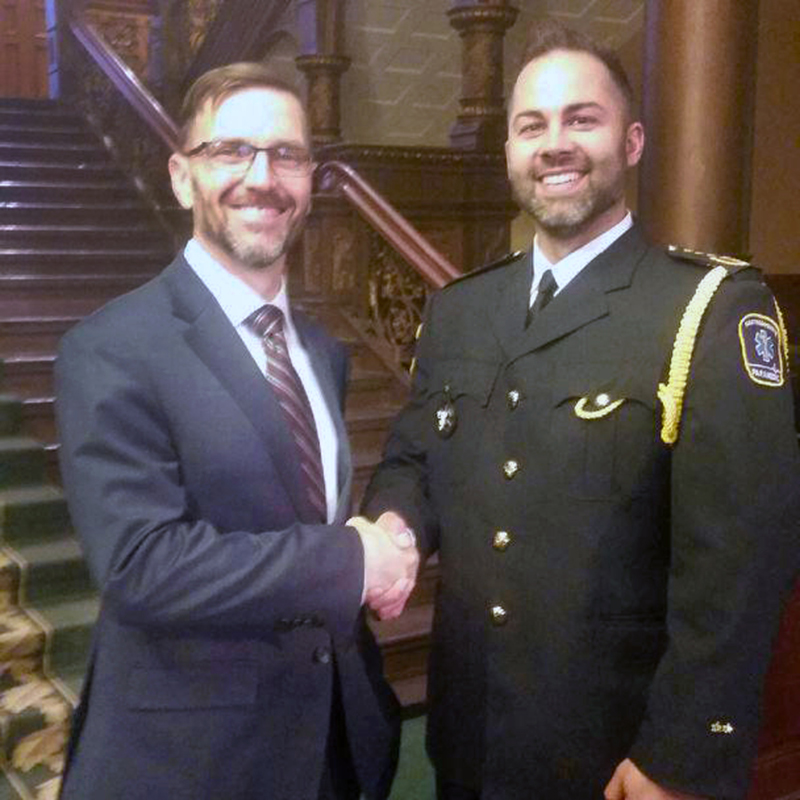 On April 11, 2015, paramedic Dominic Rehayem would see his training put to the test during a dramatic rescue. A graduate of DC’s Advanced Care Paramedic program, he was working with the Hastings-Quinte Paramedic Services when a call came in that a man had fallen into the river after an all-terrain vehicle (ATV) accident.

Springing into action, Dominic, accompanied by a local who knew the area well, set out by ATV to find the man, who had been helped to a nearby island by a friend. After a 20-minute ride, he spotted two men and the island. One man was lying down and appeared to be freezing. After throwing a rope to the man’s friend, the two used it to create a guideline between two trees. Once the safety line was in place, Dominic waded through the chest-deep water to the island. He immediately completed a full assessment to ensure the man could be transferred. After confirming he was okay to move, Dominic gave the man some of his own clothing, before strapping him to his body and wading back across the river, moving as quickly and safely as possible because he knew the man was hypothermic.

Once back to shore, he brought the man into a nearby cabin to raise his body temperature, providing further care and assessment to ensure he was stable enough to travel. During that time, two Ontario Provincial Police (OPP) officers also arrived by ATV and provided an escort back to the ambulance.

The man survived and in May 2017, the Ontario provincial government awarded Dominic for his selfless actions with the Ontario Award for Paramedic Bravery, which is given to paramedics in recognition of individual acts of outstanding courage.

For Dominic, he was just doing his job. “I didn’t realize that I would be awarded anything for completing the call. I was just happy that the outcome was a good one. It certainly was exciting for me and included all the elements of paramedicine that I cherish – improvisation, critical-thinking skills and providing patient care with a real impact, while avoiding a potentially disastrous outcome.”

He also credits the training he received at DC for helping him keep his cool during the rescue. “The Advanced Care Paramedic program prepared me by subjecting me to a certain level of stress during labs and in practice scenarios. When you couple that with the coaching and debriefing after the scenarios were complete, it really helped my skills progress. The fact that the instructors were active-duty paramedics themselves meant they were in great position to apply real-world experiences as part of their teaching.”

Of the award, Dominic says, “when I was notified, I felt a little taken aback. To me, doing everything in my power to help that man was only natural. Paramedics everywhere face dangerous and hazardous circumstances during the course of their job so it was humbling for me to receive this. I feel honored.”