The School of Science & Engineering Technology (SET) at Durham College (DC) is supporting community outreach efforts by partnering with Kedron Public School in Oshawa to offer an interactive mentorship program to students in Grades 6 through 8.

For more than seven years, Beau James, professor and program co-ordinator of SET’s Electromechanical Engineering Technology (EMTY) program, has helped grow the project across a number of classrooms in Durham Region. The project began when he hosted a tour of DC’s Robotics Lab for Grade 7 students from Lakewoods Public School as a way to introduce them to the college’s engineering programs.

In 2019, the partnership moved to Kedron P.S. and the project planned to provide access to interactive workshops across diverse disciplines, such as carpentry, bike repair and robotics, and pair them to a specific DC program. It wasn’t long before robotics became the focus with its own workshop series, led by Beau and Andrew Davis, a student from DC’s EMTY program.

On a weekly basis, Andrew connected with students to teach them how to build and program a robot – a project that developed into an exciting competition in which students designed a robot that would be used for a sustainability initiative. The series ended with a final wrap-up day, where students presented their robot designs and functions to Beau and other academic leaders.

Over the last year, as elementary schools transitioned between in-person and online learning as a result of the pandemic, DC adapted its efforts to ensure the partnership was still supported. On March 31, Beau and lab technologist, Steve Knihnisky led the first Virtual Robotics Work Cell Tour – a live-streamed tour of DC’s Robotics Lab that covered topics corresponding to the students’ recent Mechanical structures unit.

Leveraging the DC Integrated Manufacturing Centre’s (IMC) live Internet Protocol (IP) camera, Beau highlighted the main components of the robot and illustrated how to move the robot around the workcell using an industrial joystick (teach pendant). The demonstration completed with cycling the robot automatically to move through various pre-programmed positions in space, on its own. Live streaming while moving through areas of the lab allowed Beau to lead the tour while continuing to engage with the class. Students were given the opportunity to submit questions via the chat feature.

“The college’s partnership with Kedron Public School exemplifies what community outreach is all about,” says Dr. Rebecca Milburn, executive dean of the Schools of Science & Engineering Technology and Skilled Trades, Apprenticeship & Renewable Technology. “Beau’s ability to engage with the students and bring post-secondary awareness into the classroom at such an impressionable age allows the opportunity for youth to see what’s available to them. As a leader in post-secondary education, Durham College is proud to play a role in inspiring the leaders of tomorrow.”

The tour left a lasting impression on many Kedron students. One student in particular, was fascinated to see how the different robotic components worked in relation to the joints in our own bodies, inspiring him to create his own robot prototype drawing. 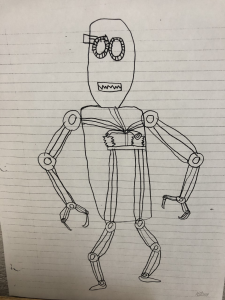 A robot prototype drawing by a Grade 6
student inspired by the Robotics Work Cell Tour.

“My student’s parents were beyond thrilled when he told them he wants to study robotics at Durham College one day,” said Kimberley Whyte, Grade 6 teacher, Kedron P.S. “Since then, he has continued to design a number of inventions and prototype drawings. It’s amazing to see the enthusiasm sparked by this tour.”

An added benefit of transitioning to a virtual learning model this year was the ability to expand “classroom” capacity to allow additional students from four classes to attend. Kedron P.S. students were excited to see inside a real robotics lab, one that is within walking distance from many of their homes.

“The virtual tour demystified some of the mystery about college, “said Terri Pellerin, Grade 8 teacher, Kedron P.S. “When the students saw how much Professor James enjoyed his work, it offered a glimpse into some of the incredible career possibilities that are available in the robotics field. We are very grateful to collaborate with Durham College and look forward to future learning opportunities.”

Beau and his team at SET are already looking at ways to continue fostering this partnership, with plans for a third phase that will extend the workshop series beyond robotics.