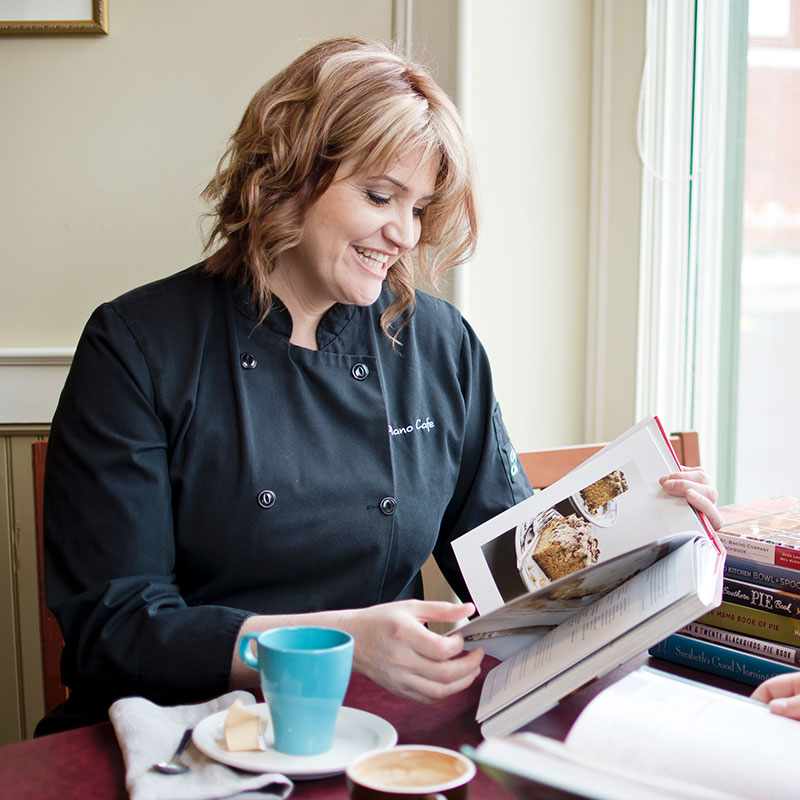 A little over 18 years ago, Christy Stone-Curry faced a tough decision. She was a new Durham College (DC) grad from the Business – Human Resources program, working her first job out of college at a large tech company. While she benefitted from steady pay, job security and a ladder to climb, the organization she worked for was experiencing the tail-end of an economic downturn. Her days were spent letting go of employees and representing her company in court almost weekly. It wasn’t the career she had imagined for herself after college – she had dreams of inspiring and building people up, instead of bringing them down.

As luck would have it, a building in downtown Port Perry, Ont. that her father owned became vacant around that time. He offered her the opportunity to rent it before anyone else – for full price – and she took the chance, not yet knowing what it would become but confident that it was the right choice. It was then that the Piano Café was born.

“The first thing I did when I opened the café was go to the local Rotary Club and submit an application for membership. I was the only female, and the youngest member at the time, but it was one of the best things I ever did for my business. That, and throw a party for everyone in town to introduce them to the café,” says Christy, who is currently the Rotary Club’s vice-president.

At the time she was a one-woman show – cooking and managing the café by herself in the first year – but the networking and informal marketing she did in the early days set her on the path to creating a unique brand. A little over a year later she added an inn to her business, taking space that was vacant above her café and renaming it the Piano Inn and Café.

Today Christy employs more than 12 kitchen and serving staff, is one of the top-rated restaurants in the area and her inn has become a hot destination for tourists looking for an intimate and cozy hideaway in Port Perry’s quaint downtown.

“The success of this business all comes down to relationships,” Christy explains. “People love to see business owners in their business, and what started as just me is now a family affair – that’s what makes us different. When you walk in at lunchtime you’ll see me checking up on tables and chatting with return customers, my husband is making drinks at the bar or helping guests in the inn, and my dad is greeting people at the door.”

Christy has made her mark not only as proprietor of the Piano Inn and Café, but also as a community leader. She is a past president and current vice-president of the Port Perry BIA and Rotary Club, winner of a Women in Rural Economic Development award and recipient of a Community Service Medallion from the Honourable Erin O’Toole, Member of Parliament for the Region of Durham.

A few years ago, Christy felt she had finally finessed her café menu – a niche selection of indulgent sandwiches, hearty soups and healthy salads that appeal to the ladies who lunch and the men they bring with them. With less time taken up by menu development, she had the opportunity to focus on marketing and taking her brand a step further.

“When I was in college, I didn’t really understand marketing. I was always more interested in the making-people-happy part of business,” says Christy. “Recently, I started calling back on my marketing classes from college and as soon as I started applying those lessons to my business things just clicked. I realized that marketing is for the people – to bring those who would enjoy our food and atmosphere the most to our door.”

The Piano Inn and Café re-launched its brand in 2018, and has seen huge success since. Christy now sells branded salad dressings, sauces, frozen soups and take-home meals, and the clubs and contests she runs throughout the year draw in people from all over the region. Her quaint downtown business has also been the backdrop for a number of TV shows and several Hallmark Channel movies. Business has never been better – and Christy knows it’s because her brand, from the menu design to the décor, represents who she is and everything she loves about her customers.

“Opening the Piano Inn and Café was about doing what I liked. I didn’t want to get up each day and arrange terminations, I wanted to inspire them and make them feel appreciated,” Christy says. “As a restaurant owner you need to be good with people while balancing the business side. Really, you have to be a little bit of everything. I didn’t go to school for food, I went to school for business, but it makes me qualified to do what I do. I would not have made it this far if I didn’t start my path in a business program.”